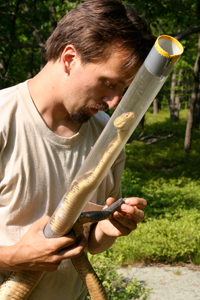 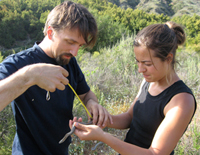 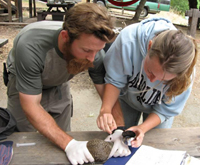 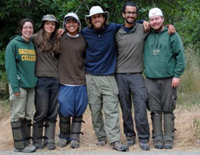 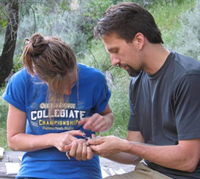 His current research uses a combination of field and laboratory studies and focuses on predator-prey interactions, social behavior, mating behavior, conservation ecology and molecular ecology.  Dr. Clark works with a diverse array of species, but primarily with reptiles and amphibians.


A recent NSF grant is allowing Dr. Clark to explore the dynamics of anti-snake displays in ground squirrels and kangaroo rats. When confronted with predators, many animals engage in lengthy, conspicuous interactions involving several stereotyped signals and displays. These anti predator signals have been studied mainly in regards to their function as warning signals directed toward conspecifics, even though they may also serve to communicate with predators. However, the study of the impact of these signals on predators has been rare because predation is infrequent and difficult to observe in the field; consequently, data on natural predator responses to anti predator signals is lacking.


Dr.  Clark’s research focuses on the behavior of rattlesnakes confronted by ground squirrels and kangaroo rats.  He and his team are assembling a large database of natural anti predator signaling interactions and predator responses in two systems that have been well characterized from the perspective of the prey species. These data are being augmented with biorobotic playbacks of anti predator signals, providing the first experimental examination of key predictions derived from predator-prey communication theory. These methods will allow them to address several fundamental questions concerning communication dynamics and the evolution of anti predator signaling behavior. This work is being pursued in collaboration with Dr. Don Owings and Dr. Sanjay Joshi at the University of California Davis, as well as Matthew Barbour and Breanna Putman, graduate students in the Clark lab at SDSU.


Dr. Clark is also engaged in research to understand the impacts of habitat fragmentation on local species. This work, supported by the San Diego Foundation, will lead to a greater understanding of how roads and other human-made barriers may be affecting the population structure and dispersal abilities of several common animals that live in the natural areas around San Diego County, including fence lizards, whiptail lizards, slender salamanders, striped whipsnakes, and field mice.  This research is done in collaboration with Dr. Robert Fisher and his research group at the United States Geological Survey, as well as Tara Luckau, a graduate student in the Clark lab at SDSU.


For further information, Dr. Clark can be reached at rclark@sciences.sdsu.edu or
594 -1527.